On Sunday May 23rd, I walked out of University of Notre Dame stadium as a recent alumnus, marking a new period of my life. The days that followed were a frenzy of boxes, goodbyes to close friends, and meticulous packing of a very undersized U-Haul trailer. Many thoughts filled my head as I made the drive down I-80 towards Pennsylvania. Notre Dame offers 74 distinct undergraduate degrees, concentrated into 58 majors within 21 broad fields of study; however, all alumni have one common major. Every person who graduates from Notre Dame receives the autonomy to be leader in the world. This awareness is not my own, nor have I fully bought into my own agency within this revelation. Yet I realized the opportunity that I had to potentially make a difference in the world, however I see fit.

When I was in the sixth grade, my cousin Corey was in a devastating car accident in which he received a traumatic brain injury. In the year before his passing over a year later, he would ride with my brother and I every day to school; on his way to be dropped off to his own job at a local flower shop. I cherish this precious time that I received with Corey, but at such a young age I could not comprehend what had occurred or the lessons that would come out of tragedy.

Years later I would grapple with these complex issues at a teenager and begin to realize the life lessons learned. The greatest of these pertains to regrets. I want to truly experience the offerings of the world, the most important is being comfortable in the discomfort of new experiences. I began to start looking into opportunities such as climbing mountains, running marathons and even Ironman triathlons. To my family and friends, it appeared that I was having a quarter-life crisis, but I was living a life fueled by a motto Corey had when he was recovering from his accident; “Why sit down when you can stand up and live life!”

Around this time, I set out to honor Corey’s legacy through racing and raising money for the Brain Injury Association of Pennsylvania. The first race was a success, an Ironman 70.3 in Wilmington, North Carolina, and I discovered a new feeling of engagement and fulfilment in my life. Fast forward to present day, I again found myself in a level of discomfort in which I now had found comfort, looking for a new challenge. I turned to the Brain Injury Association of Pennsylvania to form a long-lasting commitment to a life of living to the fullest extent of which the body and mind is capable. A brainchild to get people moving to cultivate a healthy mind and body was born; Miles for CA. This movement of getting involved in moving whether it be biking, walking, or running will be launched at the beginning of the Leadville 100 ultramarathon in August of this year. I look forward to the opportunities that are ahead in the discomfort and uncertainty and to see where this initiative goes!

The crossing of the finish line in Leadville does not mark an end to this commitment of standing up and living life, but only the beginning of Corey’s legacy. 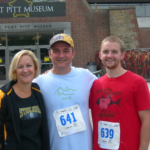 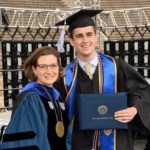 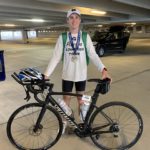 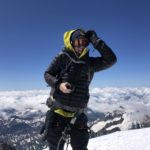